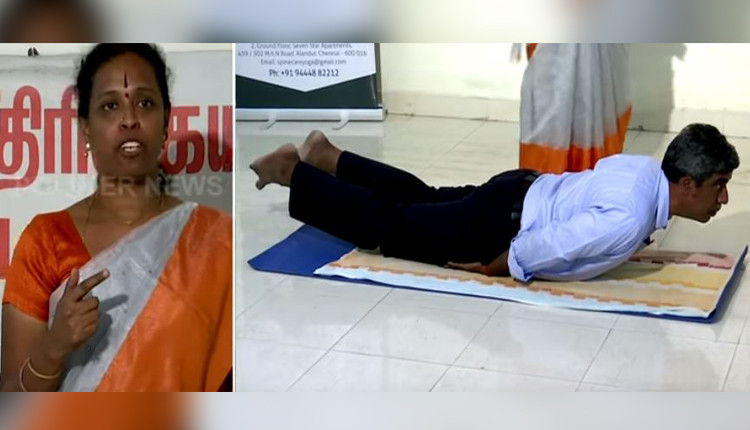 A bizarre incident in Chennai has occurred where a yoga teacher put her husband on a yoga pose and said that the Corona virus will not attack if you do yoga while lying down with your stomach resting on the floor.

Dr. Thiruthanikasalam who claims to cure Corona Virus with his Siddha Treatment says he couldn't find ways to reach China to showcase his treatment.

Siddha Doctors' medicines have not been proven to be effective in controlling or curing the Corona virus. Siddha Doctors say that in order to cure the virus, the doctor has to reach China with his medicines which claims to have a high immune system.

Similarly, at a hotel in Sivaganga, a fake advertisement has been published claiming that eating small onion dosa (Chinna Vengayam Dosa) can save from Corona virus.

Mukundi, a yoga teacher has revealed at a press conference in Chennai that she knows a yoga technique that increases the body's immune system to prevent Corona.

He said that she has been treating various ailments through yoga for 3 years. She said that her practice of yoga for five days would not let Corona virus attack anyone and that she had cured even advanced cancer and AIDS by yoga.

At the most of it, she says that she has altered her DNA using her yoga technique.
And when some people asked her what is the technique to cure the virus, she said it would cost 3 thousand rupees per sitting.

The World Health Organization recently released a report saying that there has been no drug found yet to treat Corona Virus. Health experts have also advised people to be cautious with Siddha and Unani treatments since they have not been proven yet to cure Corona.